A glamorous gem for glamourous 2018. Ladies and gentlemen, it is a brand new year and a fresh start for all of us. To quote the great Nina Simone, "It's a new dawn, it's a new day, it's a new life for me… and I'm feeling good." (The writer sometimes has Simone's Feeling Good in the background after a great day in the Diamond Room).

Anyway, I believe you would all agree that this January would be much happier if it were just a tad warmer, and the wind doesn't hurt your face. Yes, where the writer lives, the cold wind stings her face. Thankfully, until the weather decides to give us a break and warm-up, we can relish in the warmth of garnets in its varying shades of red, orange, yellow, and green. Yes, green garnets do exist, and they are quite lovely. I will delve into them later this month. Look at all that vibrant springtime green!

The green varieties of garnets are one of the rarest garnets in the world, while red garnets are abundant. Red garnets develop in metamorphic rocks on every continent. Look at all that garnet in the schist!

Garnet is also a set of closely mineral species that have the same crystal structure but different chemical compositions. Twenty species of garnet exist all over the world, partly because of these garnet fusions! Isn't that crazy? Garnet fusions, what an enjoyable thought. Garnets being able to mix in the earth to become different garnets cause a unique property called isomorphous replacement. Isomorphous replacement is where certain chemicals are switched out for other chemicals, almost like a game of catch. Here is a display from the Smithsonian featuring grossular garnets. 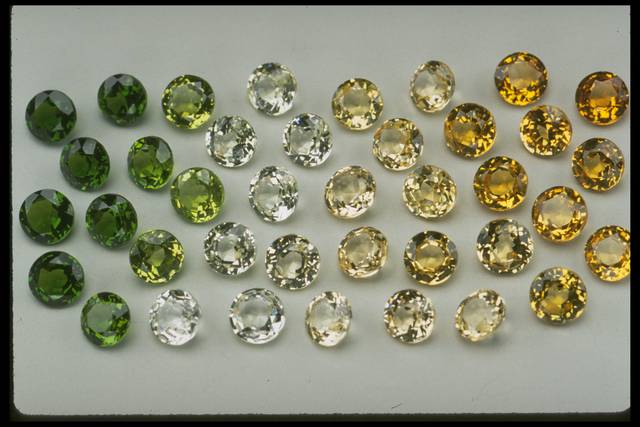 Image courtesy of The Smithsonian. Photo by Chip Clark.


Rhodolite garnet is an excellent example of a garnet fusion created from two parts pyrope garnet and one part almandite garnet. Our Victorian Inspired Garnet Pendant is an excellent example. This purplish-red variety of garnet, whose name comes from the Greek words rhodon "rose" and lithos "stone." Rhodolite is one of the most valuable red varieties of garnet with excellent clarity and always has purple as a predominant color. Rhodolite is also one of the best-selling garnets, besides almandine. Almandine gets its name from Alabanda, an ancient Asian town, and active gem trading and fashionable center. Like Rhodolite, it is a beautiful and fiery variety of garnet in its own right. When I was working on the rough draft for this blog post, I learned that Noah used almandine garnet as a lamp on the bow of the Ark, because he recognized the inner fire that is reputable to garnet. To light up your life and bring some fire to you in this cold January, we offer almandine jewelry.

Almandine is a delightful word and an equally lovely garnet variety.


Rhodolite owes its gorgeous color to almandine and Pyrope. Pyrope comes from the Greek word for "fiery-eyed", pyropos. Pyrope has the most exquisite red color ranging from a vibrant orangy red to purplish-red. This garnet variety was popular to both Greeks and Romans and it was prominent in jewelry in the Victorian Era. It used to be in intricate designs in Victorian, like that tiny crown from the Smithsonian. Today, Pyrope is in short supply, and stones above 2 carats is a rare sight to behold. Can you imagine wearing this lovely little crown to a party? I can, and it's fabulous!


Red garnets can be found all over the world, which is remarkable. No matter where you are, whether in the United States, Tanzania, or The Czech Republic (a Pyrope resource), red garnet is always bountiful.

Thank you for stopping Moijey. We hope you're enjoying 2018, and we look forward to seeing you again as we continue to bring more delightful posts about garnets.